So, after our stay in Val Di Sole, we headed to Les Deux Alpes for Crankworx Europe.
I have been to Les2Alpes before and knew that it was not really my favorite place. I kind of don’t love all the high way tracks with a lot of burms. Maybe it’s because I’m a bit afraid to slip in the burm and just fall down a cliff behind it. But even though it didn’t suit me well, we had a lot of fun there.

We arrived at Les Deux Alpes on Tuesday, way before the race. Les2Alpes is a pretty cool city. It’s not very big, and we were located right in the middle, just beside the slopestyle course.

We rode both Wednesday and Thursday on the regular tracks. It turned out to be really fun. They had built some new stuff, which was pretty fun. On the Diable trail, they had built some fun jumps, and in the small wood section there was a couple of good ones in a row. They were quite small so you had to brake into them, but they were fun anyway.

Coming into Les2Alpes my main focus was of course the downhill race, but not a race I would consider myself at my fullest. Therefore I had also planned to ride the Pumptrack competition, a thing I really looked forward to. I have won a couple of Pumptrack competitions at home, so I knew that I would have a fair chance of qualifying in, and be one of the 16 best. 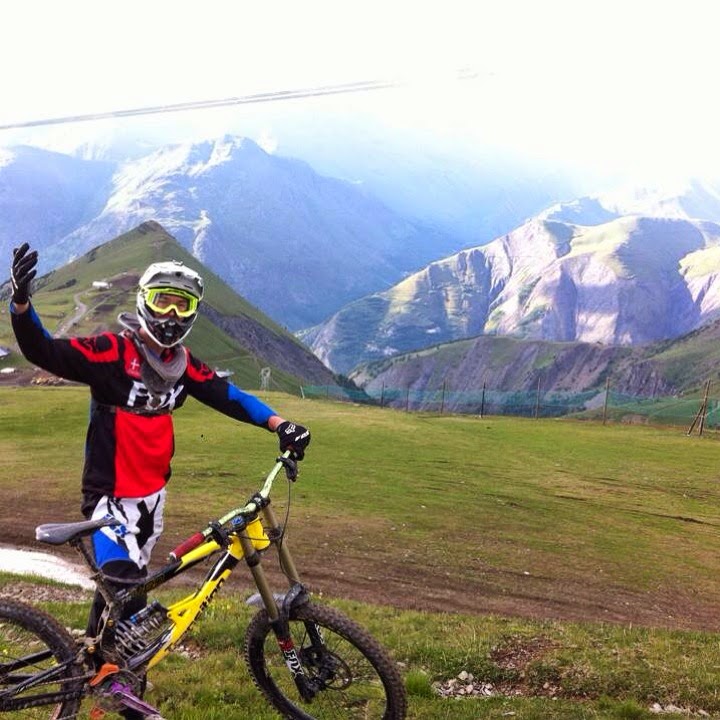 On friday there was supposed to be both trackwalk, training, and Pumptrack. We came to the lift early to get the most out of it. Sad news, “closed for the day”. The whole practice was cancelled because of strong wind at the top. I there fore looked forward to Pumptrack in the evening after a day of doing nothing. The evening came, and so did the rain. After walking a bit around asking people out, I found out that Pumptrack was postponed to Saturday.

When I woke up on Saturday I felt really bad and decided to wait a couple of hours before going to practice. Unfortunately it only got worse and I missed both the race and Pumptrack challenge. Quite a bummer, but what can you do.
On Monday the lifts to the big mountain was closed again and we decide to chill, wash some clothes and go to the driving range in Les Deux Alpes to play a bit of Golf.

Tuesday morning we drove to Morzine, after a rather disappointing stay in Les Deux Alpes.