In August this year I decided to buy caravan. I wanted to save some money and have it easier while traveling around to so many different places to ride bikes.

It has been something I have thought about in a long long time. Sometimes when I have time to really relax(I have that like all the time), I sit down and look for caravans, motorhomes and busses. It would be so rad to have a motorhome to live in for the season. But motorhomes are freakin’ expensive so I got the next best thing, a caravan.

I found this bad boy for around 1100 Euros which was quite a catch. It has beds/couch in both ends, a small kitchen in the middle and bathroom with shower. Everything you really need for a simple living. 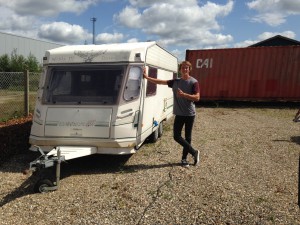 I bought the caravan one week before going on a 3 week trip to Pila and Meribel. I was quite an impulse buy actually. I had never ever driven a car with a trailer so getting a caravan on for the first time was quite a change, but actually not that bad. Some might say it was a bit hasty, but I was all good for me, I always like something new and out of my comfort zone.

Living in a Caravan for the racing season is actually pretty ideal. You don’t need to book apartments or anything. You can live a lot more free as you can just drive were ever you want. In Pila I payed to stay in the race area and get some electricity so the caravan worked properly.

I had tested if the electricity in the van worked from home, but I had not checked if the shower worked, and it did not. But after a some time with a screw driver and my lacking skills in electricity and whatever, I got the water pump to work. I still had to heat my water in the pot, but that was fine. As I am pretty tall(195cm), I made good use of the small rooftop windows, as they were my stand up points inside the caravan.

In Pila I had electricity which was super nice, but I still missed my WiFi to keep updated. I ended up going into a hotel and just asked the first guest for the WiFi code and then sat down to get my daily dose of Instagram, Facebook and Pinkbike.

In Meribel I spend a fair amount of time trying to get a space in the race area to get some electricity, but no luck. So I ended up staying in a parking lot outside some houses.

I guess they are pretty relaxed with that kind of stuff in France, because I lived there for a whole week without anyone saying anything. Before I took of from Denmark I had not though about the lack of electricity I would face.

Luckily I had some small battery driven light to use in the night and the hob and fridge was gas driven. So I spend the next week during the World Cup getting my laptop and phone charged everywhere I could as well as taking showers in a fountain. Luckily I had my laptop and my FRIENDS box to entertain me in the evening until it was out of battery. Luckily there was WiFi in the center of the city so I could go up there and check up on things while shopping groceries. The electricity was a bit of challenge some times because I had to kill the time for more than an hour while my laptop charged. I went to different bars, bought a drink and then took out my extension cord and plugged in both phone, laptop and camera. One day I snug into a hotel launch to charge my things, the receptionist came by a couple of times, but she did not say anything.

Fortunately it was lot warmer in Meribel than it was in Pila. I Pila, as it was pretty high altitude, it was freezing in the mornings. Meribel was cold too, not as cold at all.

On the way home I took a couple of days at Eurobike to talk to all the good people in the mountainbike industry. I ended up spending the first night at a parking lot at a supermarket. They weren’t too happy about me and I ended up getting kicked away at 6.A.M. I then went searching for another spot suitable for my purpose. I ended up finding a sweet little parking lot in a house district just 5 minutes walk away from the fair, which was pretty ideal.

The caravan life is actually pretty sweet and I hope I can get a motorhome for next year to cruise around in.

Here is the edit that I managed to get together from the trip.