A new season is approaching and so is the new teams. A lot of people in downhill, including me, are dying to know who is with who. I have done a little write up on what I have read about the rumours.

Luckily the game got a bit more fun this year as Team Rumours is back! Although they only came up with one picture this year, it had a ton of info. 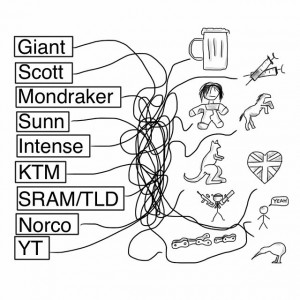 So if this is true, we can see a lot of new teams next year. Sunn seems to be back in the game. They recently released this concept bike for the world to see.

Also it seems like YT and KTM will be on the world cup circuit with a team. As far as the rumours, I have heard Norco is expanding their team, still just a rumors though.

It is a no brainer to say that the broken chain is Mulally. The beer could be Nick Beer. The needles is probably Needles. The British heart would be Hart. The little kiwi bird could be Blenki, as we know he is going to a new team. The Horse is rumored to be Cam Cole and the Kangaroo could be Troy Brosnan. Troy is rumored to move along from Specialized. The Rambo could be Sam Dale.

What we know for sure

Giant has already released their 2015 team. In the press release we can read that the team is saying goodbye to the big names of Danny Hart and Andrew Neethling. The team will consist of Marcelo Gutierrez and Alex Marin along with a new up-and-coming rider. The full team along with sponsors and partners will be announced in January.

Lapierre Gravity Republic recently signed the young Whip Off World Champ Finn Iles. He is only 15 years old, but it seems like he signed with the team for three years. Leaving the team is Sam Blenkinsop and Emmeline Ragot. Remaining is the two frenchmen Loic Bruni and Loris Vergier. The full press release is on Pinkbike here.

As you can read here, the Syndicate is off limits. Greg Minaar and Josh Bryceland has signed until the end of 2015 while Steve Peat is on the team until 2018.

PinkBike posted a picture on their Instagram of a new rider signing for Scott. Some are pretty sure it is Needles as he is pretty close friends with Brendog.

If you follow the rumor threat on VitalMtb you might have read that Danny Hart is rumoured to ride for Mondraker. A lot of people also say that Blenki is going to Norco.

Rumors also tell that Mulally is off Trek World Racing, but were he is going is another case. It would be a easy one if he transferred to SRAM/TLD. Already rides a lot with the Shaw brothers.

I should be said that I am not an industry insider, I am just really really curious and follow the topic tightly.